The Vortex - The Varsity - Six Flags Over Georgia

Click on each picture to make it bigger, then back to return here.

Traveled to Atlanta by rental car from Florida.   Headed to The Vortex first.     I visited 10 years ago, those pictures are in my report from 2009.    The place hadn't changed much.    I got a FourHorseman burger and substituted an Impossible Burger patty.   Got a side of fries and coleslaw.    How did it taste?    Awesome.
https://thevortexatl.com/ 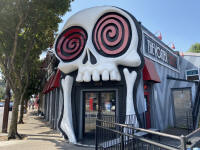 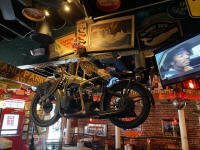 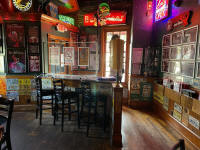 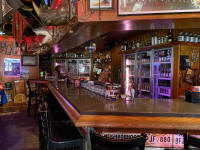 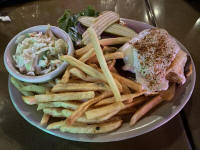 Next I headed to The Varisty for some onion rings and a peach pie.   The onion rings are the best.     What'll Ya Have!!!
http://www.thevarsity.com/ 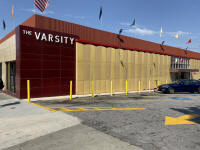 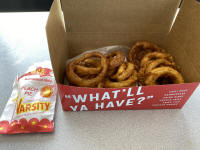 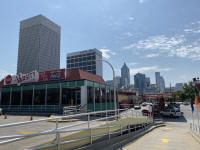 I checked into my hotel, the Wingate located next to Six Flags over Georgia.    The park was open from 6pm to midnight.   The purpose of this visit was to activate my season pass for the 2019/2020 season, and to check Twisted Cyclone off my bucket list. 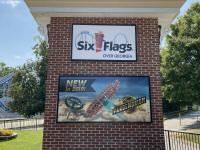 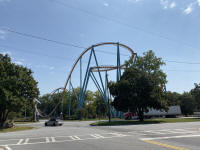 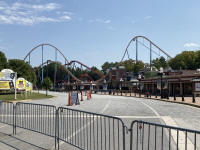 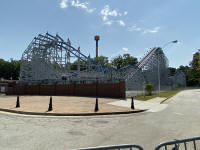 The park opened at 6pm, they processed my season pass at the gate and I went in.   My first ride was on Twisted Cyclone, an RMC conversion.    It's always a great feeling checking off a coaster from the bucket list.    I get in the ride, it dispatches, and I can't believe it's happening.   I almost think of the ride like a movie that first time.    I'm thinking to myself, "Is this really happening?"     I knew what to expect, most of the RMC elements are similar.   It's just that this one is smaller and packs everything into a shorter layout.    The elements came one after another in rapid fire succession.    I rode in the 2nd row, then the back.      TC is a great ride, but won't be near the top of my bucket list because there are other rides that are better.

It was Fright Fest at the park.   There were scareator zones with fog.     After getting the 2 rides on TC, I continued counter clockwise around the park.

Acrophobia - Drop tower ride from Intamin.   Very intense if you haven't done this for a while.   You're always wondering if the restraint is going to fly open.   No, it didn't.
Dahlonega Mine Train - I rode this as a 13 year old kid back in 1977, so it's nostalgia.   Kinda rough, but that's to be expected from a ride that opened in 1967.
Superman - B&M Flying coaster, rode in the front and back.
Great American Scream Machine - Another ride from my past, opened in 1973.  Back then this was the biggest ride in the park.   Today the ride is much worse, pot holes at the bottom of most hills, which compress my spine and shake my head.
Justice League - Battle For Metropolis - A dark ride where you shoot at targets.
Pandemonium - A giant swing ride, had large crowds.
Goliath - B&M hyper, rode in the back, great air time machine.
Georgia Sky Screamer - Spinning swing ride, tallest ride in the park.

I missed a few rides running out of time, but still had a great visit.

Let's track what rides were added and discuss.

Pandemonium is a hit, long lines.    The Great American Scream Machine needs the RMC treatment.   They could make a great coaster with all that space at the back of the park.   Coaster would go up the lift hill, turn, and make it a triple out and back before turning back to the station for the brake run.        The chute the chutes water ride (Splash Water Falls) is still there, but in pieces and rusted.  It needs to be removed and something else put in that spot.    They can also remove Blue Hawk because that's an Old Skool Arrow, didn't ride it.       Overall a great visit checking off Twisted Cyclone from my bucket list.

End of Report.   Thanks for reading.